I’m a Legend in my own mind…

How would you describe an athlete?

Where am I going with this?  Recently, I broke my leg.  Right fibula, above the malleolus to be exact.  Yep, snapped that ankle bone clean through.  Went to Urgent Care…was referred to the local orthopedic gurus in town when my very wise, albeit very old doctor, okay that was a bit judgmental…very “old school” orthopedic surgeon (note the word SURGEON) said I was a “tweener.”  I wish that meant he thought I was a child between 10 and 12 years old, no, he meant I was between needing surgery for my broken ankle and just casting it and letting nature take it’s course.

Did I mention he was a SURGEON?  So, three guesses what his preference was.  Besides dollar signs and months of recovery floating through my head and me begging not to have the dreaded “S” word…the thing that really got my goat was that he said, “If you were an ATHLETE, I’d haul your ass into surgery.”  Okay, he didn’t say ass, that was used for dramatic effect.

After I got over being offended and my bruised ego started to recover, I asked what he considered an “athlete.”  Examples given were a soccer player for the U of O or a professional football player.  I countered with, I play tennis and golf and swim and I broke that ankle hiking dammit!  He said, oh, you’ll be fine casting.  Let it be noted that his preference was to perform surgery, not because I was an “athlete” but because he was a surgeon and that’s what he likes to do, and apparently my physical pursuits did not qualify me as an “athlete.”  Who cares that surgery is double the recovery time and probably quadruple the cost.

Grrr.  So, here’s my theory and justification on me being an “athlete”…

I think most everyone would agree that Tiger Woods is considered an elite athlete.  He’s considered one of the best professional golfers of all time.  I play golf.  On any given day, Tiger can shoot below par, say 70 or below for 18 holes and he walks the course.  Now, I also walk an 18 hole golf course, AND I shoot about double that, say 140!  So I WALK FARTHER than Tiger Woods and swing those clubs TWICE as many times, so by my calculations, I’m MORE of an athlete than Tiger Woods!  And for good measure, I have higher moral standards…

So, there you have it.  I’m an athlete and a Legend in my own mind :o) 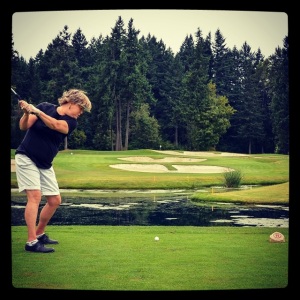