I’m a sucker for a cute dog.  Who isn’t?  And if you admit that cute dogs don’t float your boat, you’re probably lying or you’re a grinch.  Bah Humbug.  And even the famous Grinch, you know, the one that stole Christmas, had a cute dog, the ever-loving Max.

If I’m out and about and see an adorable four-legged canine, I just have to ask the owner what kind of breed it is.  Nine times outta ten it’s a designer dog.  Two AKC dog breeds mated to become one cute dog.  Well, there are probably other reasons why they create designer dogs, like disposition, personality, shedabilty. (Is that a word?)  But mainly, designer dogs are just adorably cute.  Hmm.  I’m seeing a pattern with the word, cute.  I will try to refrain from using that adjective so much.  No guarantees.

When researching this blog post, I wanted to mention only the designer dogs that I could find pictures of.  Thanks to flickr/creative commons, this is what I came up with.

The Dorkie.  Contrary to what you might think, it’s not a dweeby, middle school girl.  (Dork being the guy, dorkie, the female version) In reality, it’s a combination Dachshund and Yorkshire Terrier.  A furry little wiener dog of sorts.

Our next designer dog is the Beabull.  You can probably guess this is a mixture of Beagle and Bulldog.  Or, as I like to think of it, Snoopy and Ugga.  I’m sure Snoopy needs no introduction.  If you ever lived anywhere close to Georgia, you’d know Ugga is the University of Georgia’s bulldog mascot. These two on the left definitely look like they have the stockiness of a bulldog, but the sweet face of a beagle.

Moving on, we have Buggs.  And I’m not talking about the rabbit or those pesky little annoying critters that run around and make you say, “Ewww.”  It’s the combination Boston Terrier/Pug blend that might want you to say, “Awww,” instead.  This little guy looks like he sees a real bug.  And the look in his eyes, say, “You’re toast little creature, I’m having you for lunch!”

Now, I want to talk about the “doodle” dogs.  Seems the classic AKC Poodle is a favorite mix for designer dogs.   And why wouldn’t it be?  Poodles are smart, they don’t shed, and that curly hair will make any dog desirable.  Two that I couldn’t resist writing about, were the Schnoodle and the Labradoodle.  The first one sounds like it could be a dish ordered up in Bavaria, “I’ll have a schnoodle and a pint please!”  And the name, Labradoodle, reminds me of the children’s toy my kids loved, magnadoodle.  The first one is actually a mix of Schnauzer and Poodle and the second is a combination of Labrador and Poodle.

Both of these dogs look like they are loads of fun and camera-ready with smiles plastered all over their faces.  And oh what I’d do for that wash ‘n wear hair!

And finally, this blog post would not be complete without mentioning the perfect blend of dog.  She’s not an official designer dog, she’s the incomparable, Pom Poo Terrier.  The sublime mix of Pomeranian, Poodle and Jack Russell Terrier.  Miss Grace,  Gracie Lou Who, or GracieFacie, whatever you call her, she’s the perfect dog.  Oh, and incase you haven’t guessed by now, she’s mine.  She’s a dog that will surrender for your love, fetch like a prized retriever and has the longest tongue in the world. 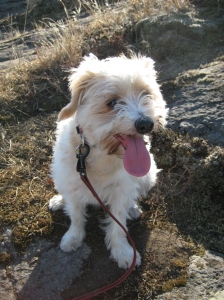